Most game tutorials I’ve read speak about how to draw things or write game logic …etc,  but when you develop a game,beside the game itself there is also UI and scene transitions that need to be implemented.

This tutorial I will show you how to handle game scenes, pause/resume your game and automatically scale the display to make your game mobiles/tablets friendly 🙂

//The goal of this tutorial is to get this result //

as a rendering engine I’ll use Pixi ; a powerful and well designed HTML5 renderer that provide a common API for both canvas2D and WebGL. Pixi can autodetect the presence of WebGL capabilities and use it, but you can also force it to use Canvas2D or WebGL.

I’ll use TypeScript as programming language, and Visual Studio 2012 for Web as IDE.

to use Pixi with TypeScript I highly recommend this TS definition : pixi.d.ts

here is how I organized my code 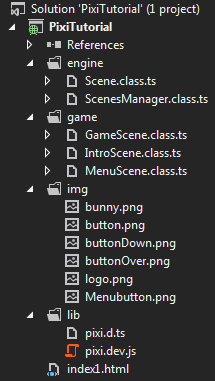 Note that this is the final structure

a scene is basically a Pixi Stage object, witch can be paused/resumed/updated

Note how we extended PIXI.Stage object using TypeScript extends keyword even if Pixi has not been written in TypeScript

To handle scenes will create a ScenesManager

Since we are supposed to have only one ScenesManager in the game, I declared all it’s functions as static.The create() method will initiate Pixi renderer and starts the gameloop immediately.

The loop() method will check if a current Scene exists and is not paused, the update and render it.

the following code replace “//# next code block” above

here, the names are explicit, and don’t need further explanation I think 😉

not the goToScene() method will pause the current scene before switching to another scene, so we preserve the scene state.

create an html file and add references to Pixi.js, ScenesManager.class.js and Scene.class.js

then add this script block before </body>

you noticed that we added our game logic (the moving bunny) to a Scene instance, in a real life case, where you have thosands of lines of code, this aproach will make your code unreadable (don’t forget that we’ll add our menus and scenes logic aswell).

so a cleaner aproach is to extend our Scene Class and allow ScenesManager to create classes of different types.

this need a modification in createScene method, witch becomes

where TScene is declared as “TScene: new () => Scene = Scene”, this syntax only means that we accept here a Class of Type Scene, and it’s default value is Scene.

we can get the same result by just declaring the function like this : public static createScene(id: string, TScene:any): Scene {…}  but well lose TypeScript compile type type checking.

now we’ll create a GameScene witch extends Scene and have all game logic.

see how all game logic is now hidden , and the code becomes mutch cleaner.

Now we’ll create two scenes to show our logo with a nice fade effect then show a menu with a clickable button before starting the game.

the game scene will contain a button allowing us to go back to the menu.

almost everything in the following class is taken from this pixi sample, I just added a control on event to not trigger them if the current scene is not active .

note : while writing this tutorial, Pixi seems to interact with objects even if they are no more visible, this is why I added a if (_this.isPaused()) return; control.
there is a pull request on pixi github repository to fix this, so the control will no more be necessary.

here I’ll just add a button, when clicked will go back to the menu scene.

in the GameScene constructor we’ll add

we have now a working scenes transitions, and interactive elements.

The last step in this tutorial is to scale the scenes so they allways fits the display while keeping aspect ratio.

here we’ll need to maintain default width and height, current with and height and a ratio to rescale all other objects, so first let’s add some variables to ScenesManager class

we also need to modify ScenesManager.create() method to handle both cases : when we need automatic rescale and when we don’t need it

while writing this tutorial, I thought that scaling a Pixi Stage (remember our scenes extends PIXI.Stage) was enought to scale all its children so I only had to multiply my scenes scale.x/y value by ratio to get everything scaled …. I was wrong 🙂

actually, this don’t seem to work, don’t know if it’s a normal behaviour or an issue … any whay I came up with a workaround.

then we’ll modify the ScenesManager.loop() method so that we apply the ratio before rendering and restore it back after, so everything is transparent while manipulating your game objects  :

everything is now ready, we just need to modify our main html file to ask the ScenesManager to rescale display

comments and/or suggestions are welcome