Hook layer for Android and iOS [Buildbox like a boss]

In this article we will add a hook layer to Buildbox Android export.
This hook layer will later give us the possibility to add custom services to Buildbox games, such as game analytics, achievements, multiple leaderboards, and even Everyplay video sharing service !

What’s a hook layer, why do we need it ?

Buildbox don’t provide any official way to hook events from code, except for custom ad networks.
The hook layer will make it possible to detect some important game events and allow us to execute custom code when they occure.

in this article we’ll add a hook layer which will detect the following events :

such events are important to detect : let’s say you want to unlock an achievement depending on the score value, for this you’ll need to know when the player loose (gameover event) and what is his score value.

Limitations :
Please note that this hook layer is a “hack”, it means that it use unofficial event detection code and could be broken by future Buildbox releases if the Buildbox development team decide to change the code behaviour.
the present code was tested with buildbox 2.1.x and 2.2.x .

First we’ll create a buildbox project to which we’ll apply the modifications.

Unchecking “Block Touch Through” will result in triggering both the Url button and the start button. so when the player will click on start button, he’ll actually also trigger url button.

Our hook layer will detect the url button click, and from the custom URL “#HOOK_Start” it’ll know which custom code to execute.

I know I could just put the bbdoc without explaining the steps to create it, but I want you to notice the custom URL buttons we created, they will be useful later
Download MyGame.bbdocbuildbox project file

Create com\ezelia\utils folder, and put BBHook.java file inside it.
your folder hierarchy should look like this. 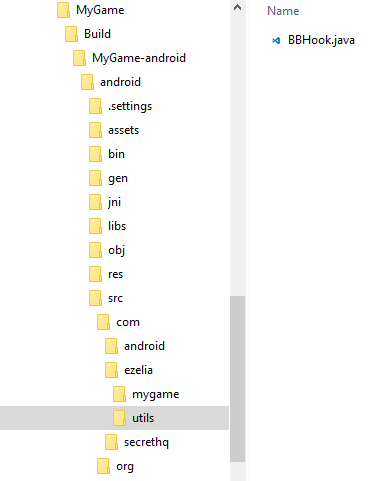 at this point the hook layer is ready, now we can add custom code to BBHook.java to handle our custom events.

To illustrate that the hook is working we’ll show a toast message for game start and game over events.

Note: The above code is triggered when the player click on a Url button with url value set to #HOOK_Start.

using the same logic you can create your custom hooked buttons : just create an url button with a url prefixed with #HOOK_  ; let’s say #HOOK_MyEvent, then add a conditional code inside onGenericEvent method, in our case the if syntax would be  if (event.equals(“MyEvent”)) { … }

Now build and run the game on your mobile.
when you click start you should see a toast message saying “Event:Game start ”

when you loose you should see the a toast message saying “Event:Game over”

Congratulations, your hook layer for android is ready 🙂 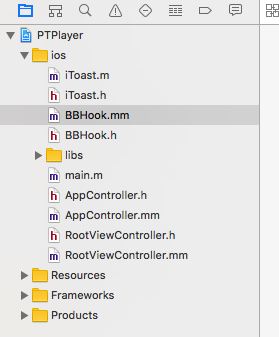 BBHook.m and BBHook.h are the custom hook layer, iToast.m and iToast.h are helper files which let us display toast messages similar to Android.

to use iToast code you need a small configuration, otherwise you’ll get a compilation error.

double click on the Compile Flags column beside iToast.m and add “-fno-objc-arc” 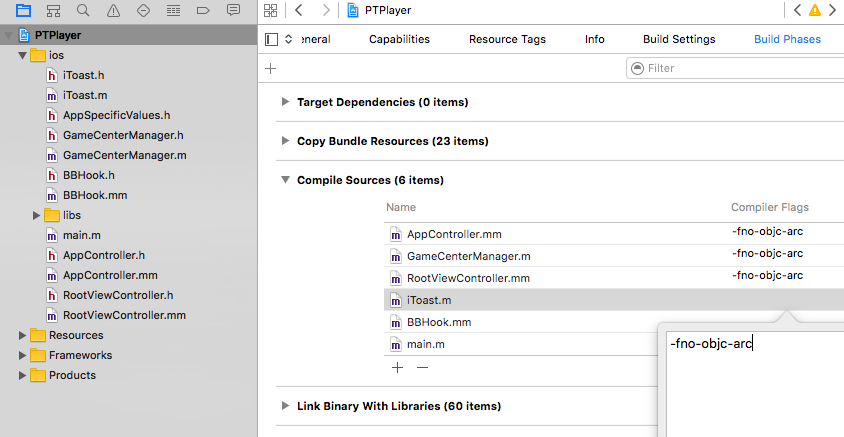 the bottom part of didFinishLaunchingWithOptions method should look like :

at this point, the hook layer is ready for iOS, we can add custom code to BBHook.mm to handle custom events

Let’s add Toast messages to check that events are correctly detected, the same logic is used as in Android code.

Build and run your project.

you’ll notice the toast messages when clicking starting the game and on gameover.

Note :
if you export the game to the same folder, Buildbox will overwrite the modified files.
one easy solution to avoid modifying the files each time is to keep a copy of modified files in a safe place, and replacing the original one each time you export a new project.

for android, you need to backup the following files : BBHook.java, PTServiceBridge.java

In this tutorial we created a hook layer allowing us to trigger custom events and use them to run custom code.

we still didn’t add anything interesting to our project (except displaying toast messages), but this hook layer is the base for interesting addition we’ll see in next tutorials.

it’s important to have it up and running, and understand how it work, since this is the base for setting up multiple leaderboards, achievements, game analytics and everyplay video recording service.

you can do a simple exercice to check that you understand how this hook layer work : modify the buildbox game and add a hook code to display a Toast message (“Event:replay”) when the player loose and click on “Replay” button. if you do this correctly, you’re redy for next tutorials 🙂